Drones and journalism: a trend in the media industry

The use of drones is increasingly becoming popular among the media industry. 2018 will bring more examples of their use for journalism purposes. Although they can be very useful when reporting, their use can be controversial. Continue reading and you will find out some pros and cons.

Everyday,  in Openhost, we map the web searching for the latest trend alerts in the communication and journalism sphere. In Spain and globally.

Since few months ago we were very intrigued about drones and their use in news gathering.  As we love technology and communication equality, we can predict that drones will be used slightly more by the Spanish media in 2018.

Looking at global examples to get the big picture for 2018, we can say that journalist from the United States are a step further. For example in terms of regulation. Federal aviation regulators already have created a special framework for the use of drones by journalist, showing the increasingly interest of the industry for this technology.

The idea of using not very expensive machines for mapping data or taking pictures from wide angles is a very attractive solution for journalist and photographers.

Drones are much smaller than helicopters (and cheaper to use). Renting an helicopter can go up to 1.500 euros per hour. But we can find decent drones for 500 euros. 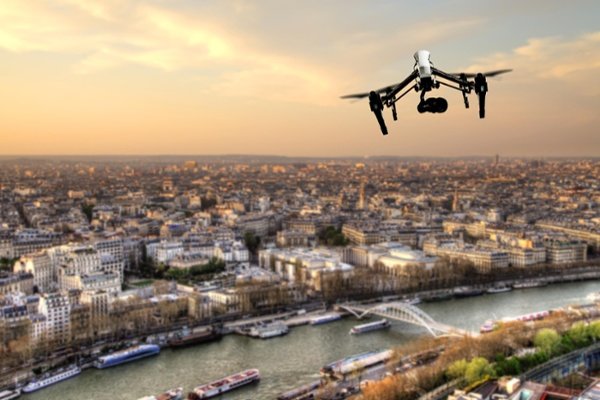 Drones can as well provide imagery from previously inaccessible locations without risk to a journalist or pilot. The latest models are being equipped with high definition technology allowing them to potentially provide stunning footage of national celebrations, political protest, natural disasters and conflict.

In this specific context, we have seen one amazing example with the  CBS’s “60 Minutes” documentary. The journalist used a drone to capture aerial footage of the villages around Chernobyl, which has been largely abandoned after a nuclear plant explosion in 1986.

Blood deliveries, plagues control, or firefighting enlarge the list of clever use of drones in other areas.

The professionals involved in their use are indeed amazed by the potential of this technology when reporting. We can see as well a variety of courses available to optimice their use and avoid the risks involved. One example is the BBC Academy, with a specific module on this matter.

We see another example by Poynters Institute who, in collaboration with Google News Lab, launched in 2017 a drone school for journalist. Until now they have trained more than 350 journalist on the fundamentals of drones pilot, evolution of drone laws, drone manufacturing and, basically, on new ways to tell stories and improve journalism.

In Spain we have seen several examples on the comercial use of drones and among journalist. Their use been explored in recent years and we can see quite a few interesting post in blogs with advices on how (and if) to use drones for journalism objectives.

Of course, using drones is not without red tape. In the United States, companies need permission from the Civil Aviation Authority to work with them. They can be unsafe if not manned by properly trained pilots. Plus, TV industry are grumbling that overuse of drones - to film pieces to camera, for example - will soon look dated.

There is a strong ethical question about filming rights and privacy. In a world where we all live surrounded by cameras it seems that drones can take an important part of our privacy.

With a drone we can be captured from perspectives totally unknown until now. You can easily imagine yourself being filmed when sun bedding in your patio, or when walking in the mountains. And you thought you would be alone...

Many professionals have stand up against the abuse of filming with drones. We can find several online resources on this respect, such for example a Code of conduct. At the end this is a question of professionalism and ethics...

As always we should equilibrate pros and cons and evaluate if the negative impact of the use of drones compensates how drones can generate valuable data.

So, now that you know more about drones and digital media, what are you waiting for experimenting with your own site? With Opennemas you can create your own digital site completely free of charge thanks to everything that our content management system offers you. Do you want to know how? Click here, and we'll tell you how.

You may also be interested in:
Last News
1
Paid content in digital media: options and challenges
2
Change Algorithm Facebook 2018: what it means and what to do
3
How to write for digital newspapers (5 key points)
4
Women and leadership in digital journalism
5
Five books about journalism you should read
Most Viewed
Top 7 skills that a digital journalist must have
Five content marketing strategies media companies can implement
5 digital journalism trends to follow in 2017
Why it is useful to create a Telegram channel for your digital media
Less than 40% of newspapers use Instagram in their social media strategy
Drones and journalism: a trend in the media industry
Nine tips on choosing the best CMS for your website (and avoid future regrets)
Five things we *hate* about Social Media