Few months ago we have introduced this new section in the blog featuring the best innovative journalism examples. We discussed about NRKbeta and Zetland Magasin. In today's post we want to focus on DeCorrespondent.com, an Amsterdam-based journalism platform launched in 2013 with a crowdfunding campaign, raising $1.7 million. Continue reading and you will understand this massive success in today's journalism reality.

In late march we wrote about NKRbeta after reading a post from Nieman Lab about the increasing concerns among the digital newsrooms for comments and forums below the information published. NKRbeta  is the tech vertical of the Norwegian public broadcaster NRK.  The strategy was to implement, in some stories, a three basic multiple-choice questions about the article, before audience are allowed to post the comment.

The initiative was done in order to don't bring down the level of the conversation and actually to avoid bad tone comments or comments without any value. 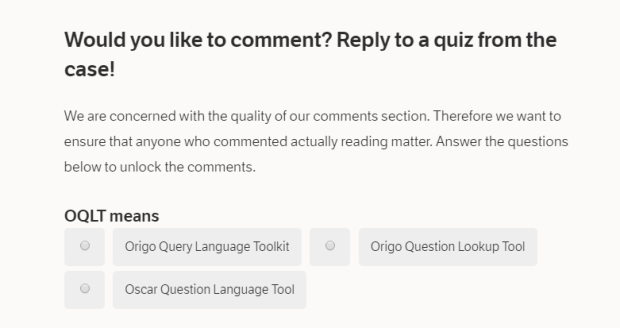 Already in march, our second post about innovative examples within the journalism sphere was about Zetland Magasin, a subscribers based magazine with a very engaged audience.

In todays post we are talking about De Correspondent and a different approach to paid content that has been proved a real option for many other online publications. 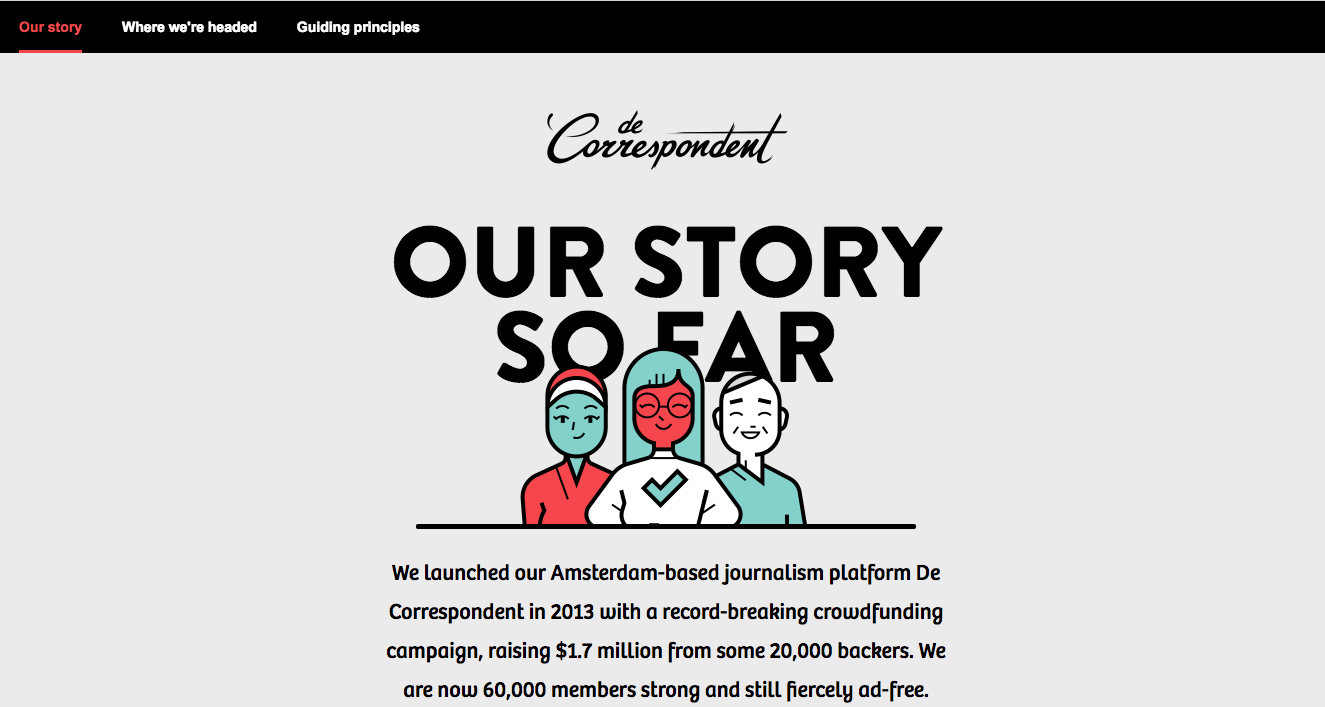 De Correspondent was founded in Amsterdam in 2013 and today, in a country with 17 million population, the newspaper self-financing thanks to its 50.000 readers. You may ask how, right? Well, there are a couple of factors to respond to this question but, mainly, because great content.

De Correspondent staff is compose by 20 full time journalist and around 75 freelances. The content that they produce is not breaking news, just good histories. Their revenue is not more than 5%. They say not to ads and no to target audiences. 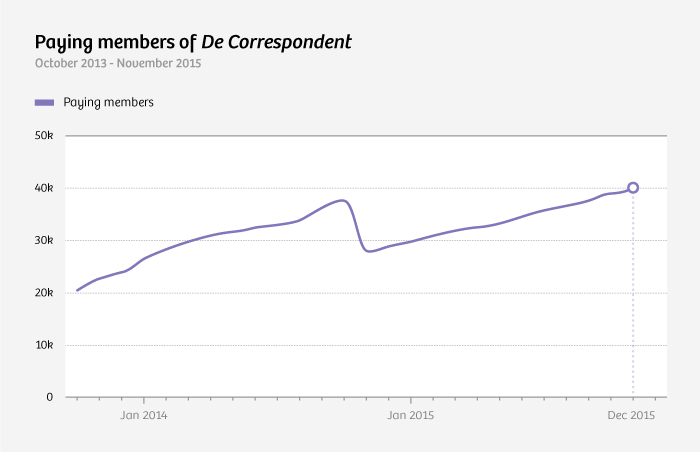 Another reason of their success is the support of its readers, contributing with a fixed amount per year to support the journalism project. For many people in the Netherlands, a journal that does not depend on the Government or on corporate advertisers, but on the readers, is a guarantee of editorial independence and neutrality in the approach to the information.

The business model of De Correspondent subsists without difficulty with a journalism that reveals and investigates topics of public interest. An this is appreciated (and financed) by the common reader. ​The experience began in 2013, and now, with the support of some North American organizations, De Correspondent is about to open an office in New York to expand this model to the other side of the Atlantic. 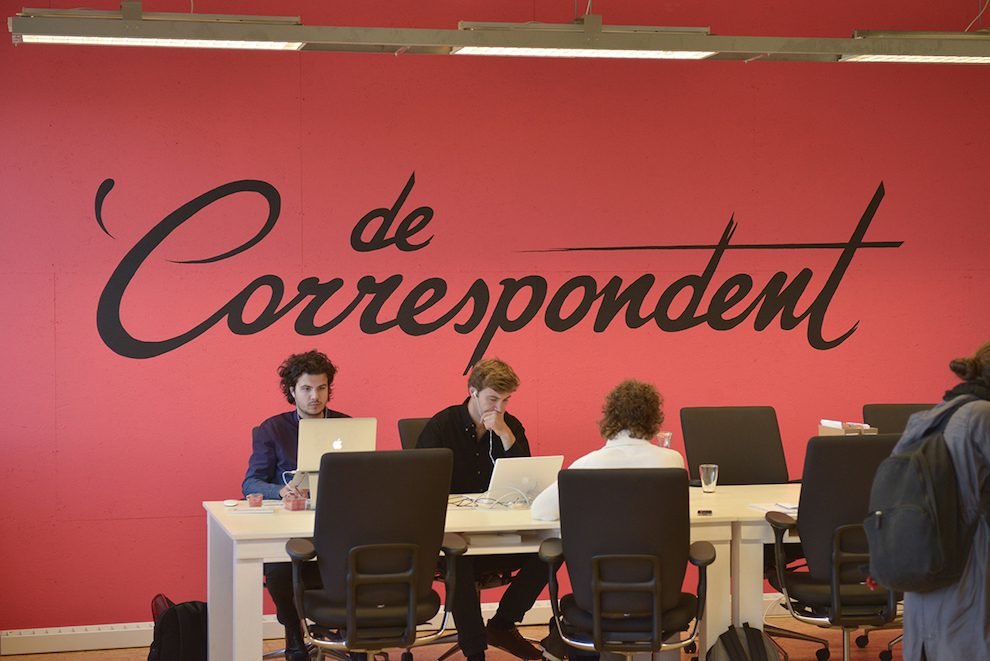 Their business model brings a more creative journalism. They produce deep insights into histories without the pressure that sometimes the traditional media reporters suffer. Their approach is to take time to investigate the stories and build trust among their readers.

In some occasions the editors use their social media pages for announcing their next investigation pieces even asking their audiences if they can supply anonymous information.

One of their master pieces has been a history about the Anglo-Dutch oil company Shell. According with their investigations, Shell knew about the effects of climate change since the 1990s at least, and did nothing about it.

De Correspondent published a unknown video made by Shell in the early 90s. the film pictured very clear the effects of climate change and global warming. But, despite this early and clear-eyed view, Shell invested many billions of dollars in highly polluting tar sand operations and on exploration in the Arctic.

The report had a great reception among the readers and has been proved that De Correspondent is truly engaged with independent journalism and free press. What is true is that their model is becoming very popular outside of the Netherlands. Paid content options will be particularly explored in 2018, and we will not be surprised if we se a Spanish version of De Correspondent very soon in Spain. FStay tuned...

So, now that you know more about paid content and De Correspondent experience with it, what are you waiting for? If you like to report in your blog, or you simply have a site with information and you have something to say, with Opennemas you can create your own digital site completely free of charge thanks to everything that our content management system offers you. Do you want to know how? Click here, and we'll tell you how.

You may also be interested in:
Last News
1
Paid content in digital media: options and challenges
2
Change Algorithm Facebook 2018: what it means and what to do
3
How to write for digital newspapers (5 key points)
4
Women and leadership in digital journalism
5
Five books about journalism you should read
Most Viewed
Top 7 skills that a digital journalist must have
Five content marketing strategies media companies can implement
5 digital journalism trends to follow in 2017
Why it is useful to create a Telegram channel for your digital media
Less than 40% of newspapers use Instagram in their social media strategy
Innovative journalism examples to follow in 2018: De Correspondent
7 Ways to be a better (digital ) journalist in 2018
Nine tips on choosing the best CMS for your website (and avoid future regrets)